Home Archives for Artists Other

Large-scale tableaus with drawings from the past decade by the well-regarded New York City-based African-American artist Whitfield Lovell are the subject of a powerful exhibition at the Hudson River Museum.

It is the excruciating consciousness of the weight of history that makes these works so memorable, along with the fact that they are really beautiful.

Born in the Bronx in 1959, Mr. Lovell focuses on the lives of black Americans from about the end of the Civil War through World War II. History and memory ooze from his assemblages, which evoke for viewers ideas and feelings linked to the period’s societal and political changes. They are sort of sweet and scary, uplifting and depressing at the same time.

Dominating the artist’s assemblages are exquisitely detailed life-size charcoal portraits based on historic photographs of anonymous people whose biographical details are now lost to time. Mr. Lovell imagines a new life and a world from scratch, posing them in domestic interiors or homemade settings using furniture picked up in flea markets, tag sales and salvage yards. 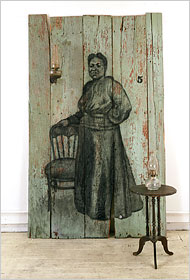 “Bringer” (1999), on loan from the Neuberger Museum of Art at Purchase, is an especially evocative work. It consists of a full-length charcoal portrait of a matronly black woman drawn on recycled wooden floor paneling, attached to which is an old glass oil lamp. On an antique side table in front of the drawing is another lamp. Together they evoke a sparse domestic interior.

Empathy is what gives this assemblage and others like it its power. The woman appears to be waiting for someone, her hand resting on the back of an empty chair in a gesture of affection. In anticipation she has left the lights on. In our own way, we have all lived it.

The visual device of a lone figure standing next to an unfilled seat recurs in several assemblages. “Ode” (1999) contains a beautiful charcoal portrait, on recycled floor boards, perhaps from an old barn, of a well-dressed man standing beside an empty easy chair, in front of which are two badly neglected and torn velvet chairs. The overall impression is one of time passing and loss.

In another tableau, “In Silence” (2003), an empty doll’s bed covered in blue gingham fabric is attached to the bottom of a portrait of a middle-aged woman wearing a high-necked blouse, her hair knotted on her head. The empty bed suggests a memorial of some kind, perhaps to a dead child. Either that or it hints at the profession of the woman, who is dressed like a 19th-century nurse.

Writing in the exhibition catalog, Bartholomew F. Bland, the museum’s curator and the organizer of this exhibition, suggests that by creating a surrogate existence for lost and contested African-American histories, the artist aims to restore a sense of dignity, identity and historical recognition to the subjects.

This quality is more apparent in some pieces than others. “Battleground” (2001) contains a delicately drawn full-length portrait of a black soldier serving in the Union Army during the Civil War. Beneath the portrait, again on recycled flooring, is an elevated platform on which sits a cannon ball, along with an Eastlake table with an open book resting on top of it.

This work memorializes the more than 150,000 African-American men who served in the Union Army and whose bravery is often overlooked in history books. Beyond this, the meaning is ambiguous, for in spite of the title the soldier stands alone, at attention – emphasizing, perhaps, the anonymity of his sacrifice.

“Twine” (2001) deals with more recent historical events, specifically the lynching of African-Americans in the South during the late 19th and early 20th centuries. Here meaning is more overt, the artist using a rope to frame the portrait of an elegant and affluent-looking black man on wooden planking. Look closely and you’ll notice the man has no legs. He is literally floating in the air.

Of course, Mr. Lovell is not alone among African-American artists in mining the historical archive. Willie Cole, Carrie Mae Weems and Lyle Ashton Harris all rescue and reuse historical images of black Americans to counter stereotypes. What is peculiar to Mr. Lovell’s work is its disquieting intimacy.

Mr. Lovell’s assemblages look at the hidden, private world of African-Americans. They take viewers into homes, show people at work, at play, alone at war. They provide an unexpectedly intimate view of black people from a bygone era, a view that exposes the biases and limitations of standard histories and inspires new historical perceptions. 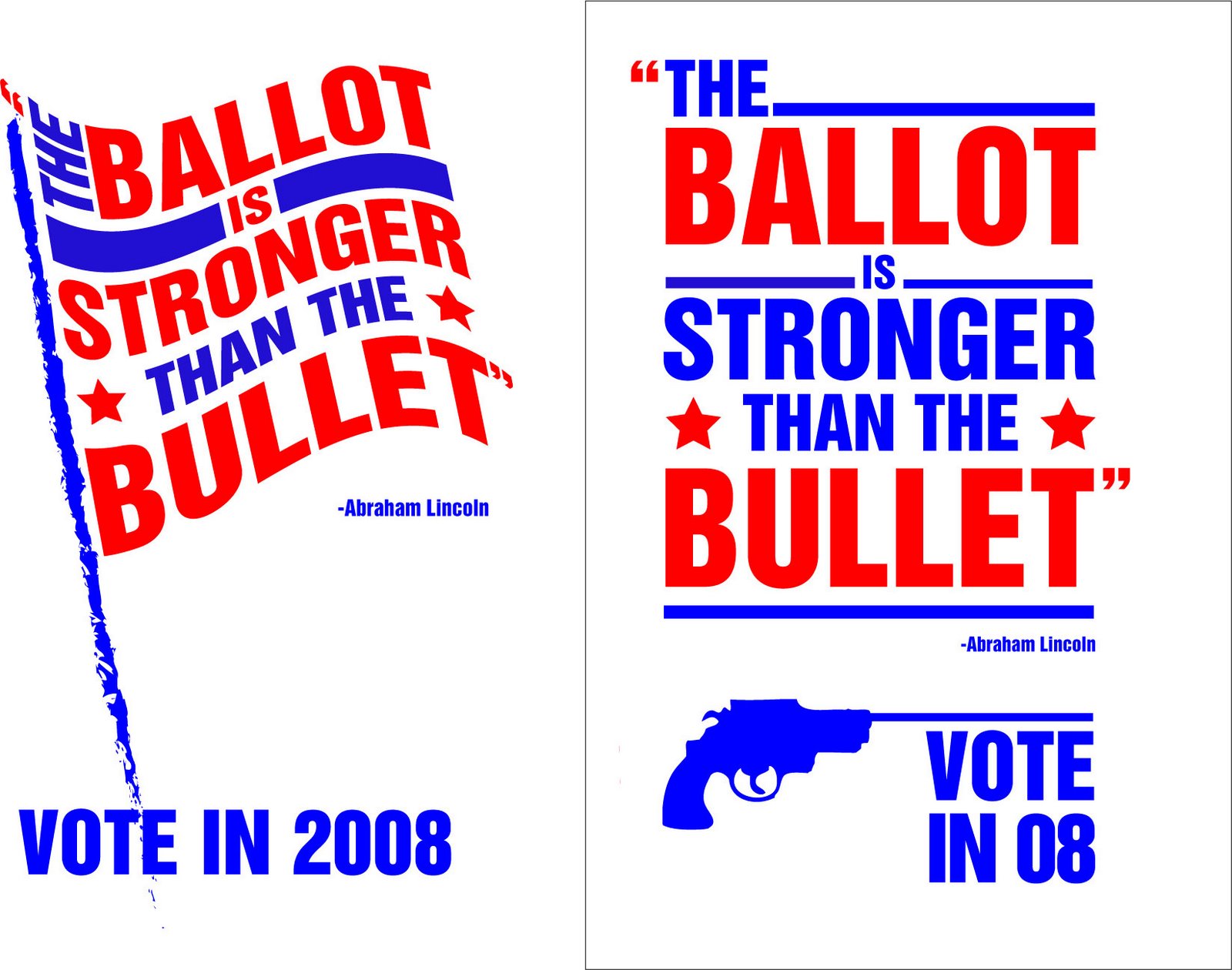 “Black Butterfly” by Michael Wallace is our featured print for this week.  It is one of  Michael Wallace‘s new releases and an item we should have back in stock shortly.  If your interested in purchasing this print please visit our Michael Wallace Art Gallery online or call us at: 678-916-6545.  Enjoy!

The Annointing by James Loveless

The featured art print this week comes from an artist from St. Louis by the name of James Loveless.  This print is entitled “The Annointing” and is one of my personal favorites by the artist and hope you enjoy it as well.  Let me know what you think!

I usually like to focus on ethnic art and ethnic artists on my site for the most part.  It’s just a personal choice and the niche market that I’m in.  However, from time to time, I find articles that are very interesting that I like to share with those that visit our site and blog.  This one in particular shows how art comes in many different forms and flavors.  It also shows how a hobby, if truly mastered, when combined with creativity can become a revenue generating activity.  I hope you find the article informative and inspirational. 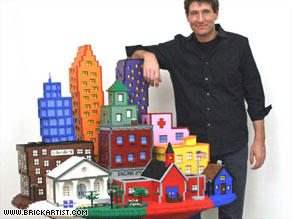 Since CNN spoke with LEGO artist Nathan Sawaya a year ago, his popularity has skyrocketed. Just check out his clientele.

Donald Trump recently asked Sawaya to create a replica of the new hotel he’s building in Dubai. With 10 days to complete it, and only architectural renderings to work from, Sawaya toiled away in his Manhattan studio snapping tiny bricks together, barely sleeping, to finish the curvy 10-foot statue in time for its unveiling.

His work has also created a, well … buzz with entertainers.

Sawaya built a 4-foot bumblebee for Fall Out Boy’s Pete Wentz to offer his new bride, Ashlee Simpson, as a wedding gift. Stephen Colbert wanted a piece of the action too. The comedian invited Sawaya on his show last August to present a life-size LEGO Colbert replica.  Read Full Article

Introducing “Harlem Heat” a new art release by Gary Kelley. This print is not currently available on our site but can be purchased directly on the blog via Paypal. We hope to have this print and the rest of our Women of Color Art Collection available by mid July. 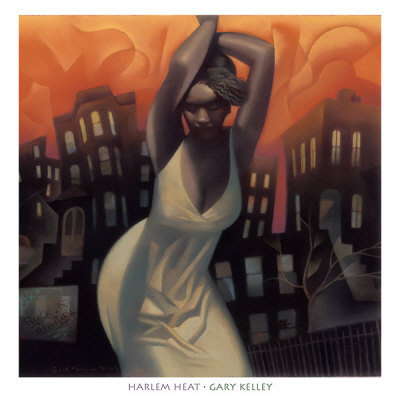