Let Her Works Praise Her!

END_OF_DOCUMENT_TOKEN_TO_BE_REPLACED

The Wassu Stone Circles of Gambia are our choice for our latest African American and African monuments feature that we post on our blog from time to time.  These monuments were selected in honor of Gambia’s national independence day which was celebrated on Feb. 18, 2010.  END_OF_DOCUMENT_TOKEN_TO_BE_REPLACED

I was reading an article on ebonyjet.com about what foreign languages African American sshould teach their children when I read this paragraph:

I had no idea that there were that many people of African descent located in Brazil so I decided to look into it a little further, enlighten myself and make a point to feature Afro-Brazilians in my next couple of posts on the blog.  The first is a photo of a monument/statue dedicated to Zumbi.  Zumbi is celebrated as a hero, freedom fighter, and symbol of freedom amongst Afro-Brazilians in Brazil. 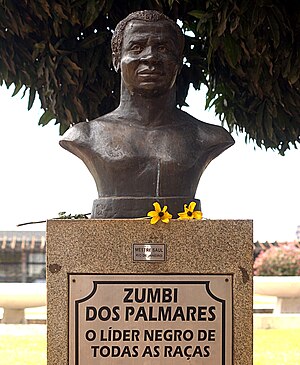 Zumbi has become a hero of the twentieth-century Afro-Brazilian political movement.  November 20th, is celebrated as a day of Black Awareness “Consciência Negra” primarily in Rio De Janeiro.  Below you will find some additional resources where you can learn more about the Afro-Brazilian icon.

1. The Legacy of George Washington Carver

When I took my first trip to Savannah earlier this year for a conference I was surprised when I stumbled upon this monument. It was dedicated to Haitians that fought in the American Revolution that were trying to help free America from the British. I thought it was a beautiful monument and contained historical information that is definitely not widely known. Enjoy and hopefully you’ll get the opportunity to visit Savannah and see it for yourself!